The kids came running toward their school when they saw our Land Cruiser drive onto the school grounds. They had been waiting patiently at the entrance for a glimpse of our vehicle. With huge smiles on their faces they waved and greeted us with "Jambo, Karibu sana!" 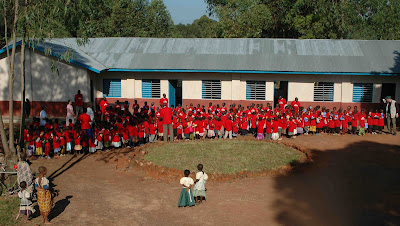 Very soon they were lined up in the front of the school. Then they sang several songs for us. The first thing we did was to personally dress them in their new "Twing Memorial School" t-shirts. After they had the t-shirts on, draw string bags of goodies and colored pencils were distributed. Then the children went to their classrooms for some more singing and personal time with our team. 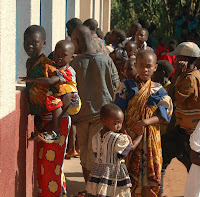 While the children were in their classroom, a crowd was gathering outside of the school -- parents, interested members of the village, and a large number of children who desperately want to enroll. We learned that all of the school children are missing one or both parents. The Twing Memorial Association for Health, Evangelism, and Education Development, a Tanzanian NGO (non-governmental organization), has determined that tuition will never be charged the families of the children attending this school. It was not built for those of privilege. Calculations were quickly done to determine the per student cost of running the school -- a mere $20 US per year -- for a twelve-month school year at that! Throughout the rest of our trip this figure haunted us as we considered the purchase of treasures to take home.

To meet the demands for enrollment, Pastor Musa showed us the foundation and walls of new classrooms that are being added right now. "It will cost $15,000 more to add these rooms," he informed us. "This will give us three more classrooms and a library," he added. We met the builder for the project. "We must give him a t-shirt, too." Musa suggested.

Before we arrived at the school Musa had been chairing a school board meeting. At that meeting it was voted to hire a new school headmaster. An Adventist who is a government teacher accepted the position. He will take a significant pay loss to accept this position near his home for approximately $120 per month.

In appreciation for the work the teachers have done, all of us opened up our wallets to give a bonus to the current staff, equal to one month's pay.
Posted by Rachel Twing Terwillegar at 1:26 AM