To Hire an Armed Guard, or Not? 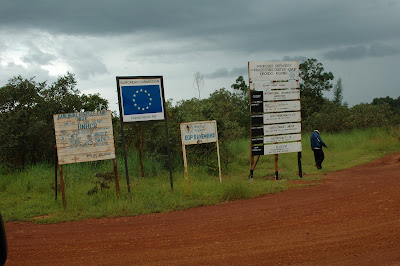 Pastor Musa told us how robbers would come out of the forest (jungle) and stop vehicles, especially in villages along the border. They would then rob the individuals in the car, sometimes beating and killing them, take the vehicle away, and then abandon the vehicle down the road somewhere. He suggested we should hire an armed escort as we entered the Kigoma region. Things were going well and for some reason he did not hire a guard on the road to Heri Hospital.
A guard was not hired on the return trip either. As you can see by the map, the Kigoma Region is along the border with Burundi and Rwanda. The robbers come from both countries.

We made it through both ways, no problem. I had asked Musa to stop so I could take a photo of the signs at the entrance to a refugee camp near Kasula. He was hesitant to do so, but we accomplished the photo quickly. He told us the individual standing by the road sign could have a cell phone and call the robbers stationed in the forest with our details, so they could rob us down the road. (Tammy took photos, too, as well as Carol and I.)
Nothing happened and praise God we arrived home in Arusha a day later. Shortly after our arrival, Musa got a phone call from his brother. "You are alright, it is so good to hear your voice. Robbers stopped two vehicles like yours in Kasula. They robbed the people there and abandoned the vehicles down the road. When we heard the news we were concerned because we knew you were there that same day."
Needless to say, we had the best armed guard one could have. Our Land Rover, 4 wheel drive has been renamed . . . "4 Angel Drive." Thank you Jesus for your protective angels!
Posted by Rachel Twing Terwillegar at 5:42 AM