The Luxury of Staying Hydrated 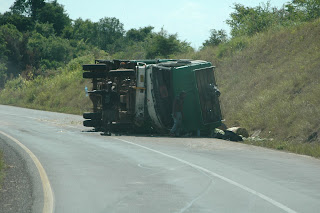 Staying hydrated on our long trips was not hard, as most of the towns we passed sold bottled water for just pennies each. I, however, chose not to stay hydrated. Why? Number one, I did not want us to have to stop often, as the sooner we got there, the more time we had to solve any “being stranded” problems we might encounter (I did not want to miss my flight!).
Secondly, I discovered very quickly that being adequately hydrated, and avoiding stoping on the bumpy roads made for an excruciatingly uncomfortable ride in the back of the car. I had to hold on with more than just my hands and feet! :)
The men in this picture have the opposite problem to me. Can you see the empty water bottle in the extended arm of the man standing beside his overturned truck? That’s his way of asking passers-by for water. We passed one accident where the people had been stranded for two days. We shared some water bottles with them, which I did not have a problem doing. I always had a dry mouth, however!
Posted by Tammy Pannekoek at 10:33 PM