The Luxury of Car Alarms 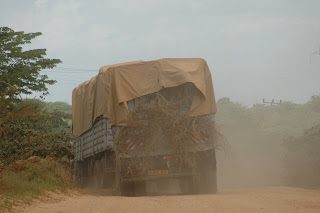 When you have a car as nice as Musa’s in Tanzania, it has to have a car alarm on it. His car alarm went off so many times that it became one of our favourite travel songs! It had a habit of going off whenever Musa left us alone in the car. Everyone in the crowded markets where we stoped would stare at us through the windows while we cringed and waited for Musa to return.

The first time Musa let Randy drive, the security company called Musa and asked him, “Are you alright?” (How did they know it wasn't him in the driver's seat?) At the time Musa was in the back of his own car with all the luggage, and we wondered if they could see him somehow and thought that he was being kidnapped.

As you can see in the photo, truck drivers have a unique way of securing their vehicles too, or at least the stuff inside their vehicles. Can you see the thorn bushes straped to the back of the truck? Good luck trying to climb up and reach inside!
Posted by Tammy Pannekoek at 1:41 AM