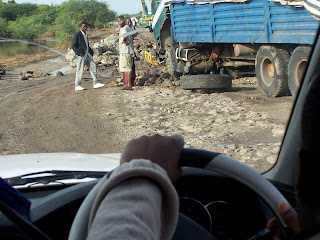 The trip to Kigoma, on the other hand was the most unique trip I have ever taken. There were six of us in Musa’s Toyota, Randy and Musa up front, with Musa driving with brief periods of relief from Randy every now and again. (Musa drives just like my husband, Luke, fast with just centimetres to spare on the sides) Mom, Carol and Curt were in the middle, and I was in the back with some of the luggage that was not on top of the car. Every now and then someone would take pity on me and trade. Those were wonderful times, (thanks guys).

On the trip to Moro and Dar, I put suitcases in the gap between the seats so I could lay down and catch up on my sleep. That was was nice. Not so on the way to Kigoma. They were all dirt roads with bumps that could knock you out flat, if you didn’t hold on. After a while I began to feel like an M&M in a Tupperware dish being shaken by a hungry, frustrated giant. At the end of most days all my muscles ached from bracing myself against the walls of the Cruiser. Added to that was the fear of rain. It was wet when we started, and we saw all sorts of vehicles stuck in the mud. Musa had told us stories about being stranded for weeks at a time. And we were travelling at the beginning of the wet season! Thanks for the warning Musa! I was in constant fear of getting stranded and missing my flight home.
Posted by Tammy Pannekoek at 9:29 PM