The Luxury of Rubbish Bins 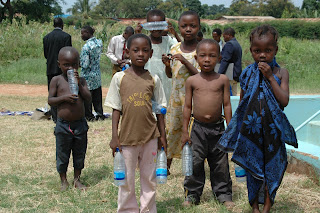 Needless to say, there were not many public rubbish bins along the roads in Tanzania. (Even if there were, I wouldn’t have wanted to stop for them!) That left us with an ever increasing pile of water bottles in the car. (Some of the others in the group had bladders with a larger capacity than mine, apparently.)

Up in the front, however, Musa didn’t seem to have the same backlog of bottles as the rest of us. I was shocked when I discovered why. He was throwing them out the window! How rude, it’s his own country and he is throwing rubbish out the window? When questioned about it, he told us, “Oh, no, it is no problem. Whoever finds that bottle will be so happy. They are so useful for so many different things.”

After that, we all kept our eyes peeled for little children playing by the side of the road. Whenever we saw one, we would roll down the window and throw a bottle out to them. They would come running, jabbering excitedly. (We had to be very careful and throw one for each -- if we did not, a fight would ensue. You should have seen their happy faces. So cute!
Posted by Tammy Pannekoek at 10:50 PM