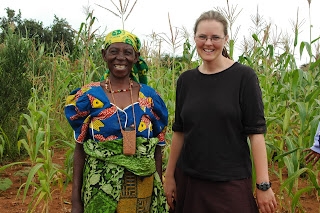 I was surprised to see how many people had mobile phones glued to their ears. They can be living in mud huts, travelling long distances to get water, but carry a mobile phone with them, as was the case with the lady in the photo with me. If you look closely, you can see that inside the woven pouch around her neck, she carries her mobile phone.
According to BBC news online, in 2005 some 97% of Tanzanians claimed to have access to mobile phones even though only 1 in 10 houses have electricity.
Musa says to get onto the internet using his phone costs only 1 US cent, with unlimited time. He was always on the phone, and he had coverage everywhere. Even in places so remote you would not even think to turn your mobile on if you were in the US. My Mom had paid extra so that she could use her mobile while there, and she never had coverage, but Musa could talk anywhere. 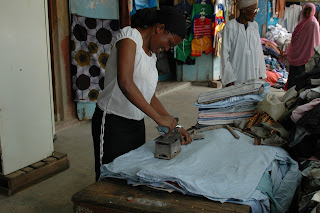 I was also impressed with this woman’s cordless iron. I have been looking for a cordless iron for ages for my mother-in-law. It’s not exactly the kind I wanted, though. Inside the iron itself, there are hot coals keeping it warm!
Posted by Tammy Pannekoek at 3:48 AM

Wow, that iron reminds me of the iron my mother used when I was a child. It sat on the top of the wood stove, and when hot, ironing was done.
I look forward to you finding a modern one.
Thanks, Tammy
Your Ma-in-law