The Luxury of Hot Water 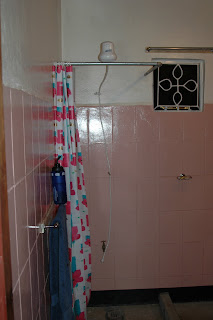 In order to get hot water at Musa’s house, (and he has a very nice house) first someone has to dig a very, very big hole. Then someone has to chop down a hardwood tree and cut it up into logs and put into the hole. Next, a fire has to be lit in the hole, and the hole has to be covered up. After about a week, the hole has to be uncovered, and some one has to collect the coal that is left. That coal is then put into a big white sack and placed by the side of the road, where Musa can see it on his way home from one of his many long trips. When he gets home with the coal, his wife, Winfrieda, has to put it into a ceramic pot with a burner on the top of it. Once the coal is lit, she has to put a huge pot of water on the burner. When that water is heated up, whoever wants a hot shower has to pour some of the hot water into a bucket, take it and a dipper and stand in the bath to take their “shower.” This process is perhaps much less complicated than the process village people go through.
I never bothered having a hot shower at Musa’s house. The old wash cloth, cold water and soap did me just fine. We stayed at hotels with hot water a few times, and boy did I enjoy the showers then. Of course, as soon as you got clean, one you had re-applied the bug repellent, you felt just as dirty as before your shower! This is a picture of the hot water system at one of the hotels. See the unit at the top of the shower? Instant hot water, and very economical.
Posted by Tammy Pannekoek at 2:40 AM