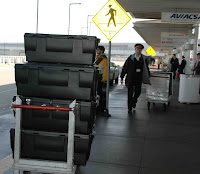 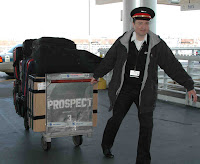 After getting to bed this morning at 3:00, we were up at 7:00, showered, and proceeded to finish packing. Good news came at 7:00 a.m. when Plan B was shortened a bit by some good news. Our plane doesn't leave until 8 pm something, but with 17 bags to check in, each weighing 70 lbs, we decided we would be better off cooling our jets in the waiting area rather than waiting in a long line.

The unfortunate chap that met us at the airport didn't hesitate at his lot to help us with all those bags. He stayed patiently through the process with the TSA and even allowed us to get his photo.


BA has a new excess baggage system. For some reason they were not able to process the charge for one of our excess bags. (The others were paid for online). Anyway, Randy, sporting his mosquito net hat, enjoys the news from the attendent, "Because you have waited so long I've asked my supervisor to waive the charges." That was the best hourly wage Randy has earned in quite some time . . . over $200. Later I told him that the agent reported she could not find two charges in their system for the bags I paid for online. She was quite sure BA would have to"eat" the $924, as we had a receipt. I hadn't paid particular attention to the receipt, but upon closer look there were two charges of $924 with a total of $924.

Meanwhile, Viorel Catarama shows up with 7 bags to check in and get his seat assignment. His bags looked like ours. (They had asked if there was anyone else in our group, so knew he would be coming along.) We had been there some time dealing with the payment of the excess bag, so knowing he was with us, they didn't even weigh his bags! Unfortunately, however, not all the agents were having difficulty processing charges for excess bags. Here you see THE VERY NICE agent with his credit card. We didn't wait around to see if he got the same treatment we did. Will find out shortly whether or not his card gave their system a jolt like ours did!
Posted by Rachel Twing Terwillegar at 1:44 PM

Reading about this trip is almost as good as going too, which I would dearly love to be doing.
We are so blessed to have Tammy married to our son, Luke, and be part of this unfolding story of "Grandma Africa".
Bernice Pannekoek