One thing was difficult for me . . . presenting training to people in a language not my own. Everyone attending was so gracious. They thought our delivery was flawless. They were so appreciative that we would travel at our own expense for days to bring them some new evangelism tools.

Tammy's music added a special dimension to the training program. Living in Australia for the last two years we've missed her, Luke, and the boys terribly. How mature she has become, not only in her personality, but in her voice. She sang like an angel, with so much grace and confidence. It was obvious the audience enjoyed her song service and special numbers.

Had never seen Viorel Catarama before an audience. He's traveled all over the world doing evangelism with his family. His presentations were equally as awesome. And, Pastor Musa Mitekaro, wow, what a presentation! It is obvious that this man, one of Mama Twing's children, was meant to be a pastor. He's won thousands since he was a mere teenager. Just this past six months he has baptized more than 4,000. He was powerful in his presentations on getting people to a decision and preparing them for baptism.

The commitment ceremony capped off our presentations. We are anxious to hear how these laymen and pastors, all 300 of them will use their new tools. They'll have some challenges, such as re-charging the battery. Most of them do not have electricity in their homes. They'll grab power from vehicles they travel in . . . government offices, just everywhere they can! 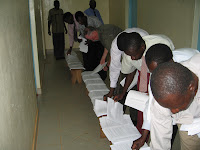 All the while presentations were being made, work was happening in the back room. We had to assemble all the parts of the DVD players, the cords, batteries, etc. as they had been disassembled to pack them in suitcases and foot lockers, equalizing volume and weight to minimize the number of pieces we brought on the plane.
Also, the copy work had not been done before our presentations, so a fair amount of collating had to be done. It was hot in the back hallway where this work was being done. There were no fans. We thought we would die, but the work got done. The conference president worked along side of us through part of the work. There wasn't a dry spot on his shirt after a few minutes of gathering things together.

Hang on . . . laymen in Tanania have some new tools. They now know how to use them. It will be exciting to receive reports from this field. BTW, did I mention that many of them, too, traveled for days to get to the training session.
Posted by Rachel Twing Terwillegar at 11:30 PM